If you sometimes miss anniversaries, Valentine's Day or other events, this video can help!

If you like it, please consider buying me a coffee to fuel the next project (and help me get rid of ads from this site):

There are several ways to think of 'easy calligraphy'. Take your pick ...

As an amateur calligrapher, I've found that the easiest script to make an impression with (on non-calligraphers) is formal Gothic.

There are a few reasons for this:

So, if you’re a beginner and you need a relatively easy calligraphy script to get maximum attention from non-calligraphers in minimum time, I suggest you start with the first page of the formal Gothic tutorial  and just work your way through. In a couple of hours or perhaps much less you’ll be good to go.

(Bear in mind though that what you will produce will most probably not be "calligraphy. It will be fancy lettering, rather than something approaching art – as defined on the ‘What is calligraphy?’ page.)

Many calligraphers recommend roundhand as the best beginner script to practise with (and to develop good calligraphy habits with).

Perhaps you already know something about calligraphy. You’re willing to spend a little time now cultivating the right skills to write well. You’d like eventually to produce something more authentic and well-structured than just ornamental fancy lettering. If so, 'easy calligraphy' means the simplest and best hand from which to learn good habits and skills.  I highly, highly recommend roundhand as your starting point.

(A good roundhand is the calligraphic style which just keeps on coming back. The Carolingian Reform in the 8th century developed a roundhand to promote learning. The Renaissance developed and adopted humanistic roundhand for the same reason. At the turn of the 20th century, Edward Johnston re-adopted a ‘foundational’ roundhand for training calligraphers which still holds its own.)

Roundhand is easy calligraphy because it is simple, clear and beautiful. Its proportions are forgiving of minor errors. It’s constructed from smooth, regular lines and circles, so it’s easy to see where you’ve gone wrong and easy to put it right. It encourages good calligraphic habits.

Moreover, when you can do roundhand well, you will find it lends itself to almost any lettering purpose.

It is not easy to create world-class calligraphy in roundhand ... it is almost deceptively simple. It could be compared with the English language: very easy to learn enough to communicate well, more difficult to use professionally. But roundhand is an excellent ‘easy calligraphy’ to get yourself launched into more serious calligraphy skills and results.

The third answer is: I have good news and bad news about ‘easy calligraphy’ ...

The good news is that despite what I wrote above, there is no such thing as ‘easy calligraphy,’ at least to begin with.

Of course a good calligrapher makes it look so very easy. Like an Olympic skier tracing the snow with supreme elegance at mind-boggling speed, the pro calligrapher’s nib races across the page, leaving beautiful tracks of ink.  Looking on, it’s impossible not to think, ‘Cool ... I want to do that too.’

But that calligrapher, like the skier, has spent years persistently chipping down walls of impatience and lack of practice, bit by bit, so that his or her inborn talent can soar.

‘Easy calligraphy’ is more or less ‘easy bicycle-riding’ or 'easy ballroom dancing'. It is really easy, after you’ve learned how. The learning how can involve a lot of mistakes, inky fingernails, wasted paper and frustration.

Pen angle, letter proportions, pressure variation, nib types, ink-flow ... it can all look rather overwhelming when all you want is to have fun making beautiful pages. But keep going.

When I feel dismayed by the amount of work ahead of me, I compare calligraphy skills with other physical activities I’ve learned.

I’m sure you too have learned a physical skill such as skiing, dancing, football, driving a car or playing a musical instrument. Even eating and talking started out pretty hard for all of us (I assure you.) So you know how it goes. To succeed in a physical activity requires that you practise certain movements until they become instinctive. 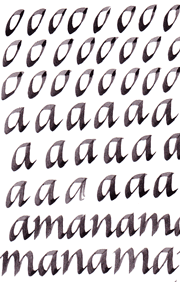 Same with calligraphy, I tell myself. First, you have to know how to get it right once, slowly.

Then do it again ... then again, correcting it a little ... then, bother, the proportions have slipped so you correct that too on the next try until it's about right.

Then it takes practice to do that one letter right again and again. Rows and rows of the darn things, just like driving up and down in a car and learning to park it round corners!

More practice, more correction and more practice to build up speed, grace and rhythm. It gets easier. One day, you won’t have to think anymore. You’ll just do it.

But actually it isn’t hard to achieve pleasing results right from the beginning. Get the basics correct, and practice will take you the rest of the way.

As with driving a car, though, if you practise for too many months without instruction, you might build in bad habits. So if you're serious about wanting to improve, it's always best to get a teacher sooner rather than later, so you won't have to 'unlearn' too much later.

And, yes, it genuinely is good news that it takes some work.

(Well, it would be really depressing if just anyone and everyone, with no practice and no knowledge, could pick up a pen and write calligraphy as well as an expert.)

So, that was the good news.

While 'easy calligraphy' is not all that easy, giving up is, sadly, far too easy.

Often, my students think calligraphy should start easy and get harder. I don't know why: it isn't true of any other skill in life! Maybe an hour or two of fun practice and then they are unhappy because they aren’t creating masterpieces.

Calligraphy is not 'easy for beginners, hard for experts'. It’s the other way around. It seems hard at first. If you keep working through the hard stuff and walking up the mountain-sides at the beginning, then it gets to be easier and easier and eventually becomes easy calligraphy.

Of course, you end up having whatever you've practised doing, whether right or wrong, so it is useful to get into good habits from early on.

As with every skill, I think the truly great calligraphers never stop learning and looking again.

Go to 'How to Write Calligraphy'

Return from 'Easy calligraphy' to homepage