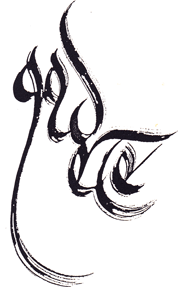 What is calligraphy really? Here’s where we scrape off any dull, half-hearted definitions that might be holding your calligraphy back.

Calligraphy is more than ‘beautiful handwriting’ or ‘ornate lettering techniques.’

Calligraphy is the art of forming beautiful symbols by hand and arranging them well.

It’s a set of skills and techniques for positioning and inscribing words so they show integrity, harmony, some sort of ancestry, rhythm and creative fire.

(That's a summary of around 30 comments by calligraphers and lettering experts.)

You could also say that reading calligraphy is the closest you can get to hearing music with your eyes.

Symbol here means a mark which has a specific agreed-upon meaning in a language, like a letter of the alphabet, a numeral or a word.

Integrity of a letter or other symbol means admirable proportions and form.

Harmony describes a pleasing relationship between different visual elements in a piece of calligraphy: parts of a letter, letters, words, the whole text and surrounding space.

Ancestry refers to the heritage of letter-shapes, materials and techniques which calligraphers use.

Rhythm means the calligrapher's deliberate repetition and variation of marks and spaces to create feelings of pattern and emphasis when you look at the work.

Creative fire ... well ... that’s the slightly mysterious life and individuality of any piece of art. That’s the part of it which is you.

So, next time a nice bit of ‘calligraphy’ passes you by in the street, ask yourself:

Do the letter-forms have INTEGRITY?
Do the elements work in HARMONY?
Does it seem aware of its ANCESTRY?
Does it move with RHYTHM and SOUL?

Perhaps you think I’m overdoing it. Not at all. Scroll down to the bottom to see a selection of ‘what is calligraphy’ comments by professional calligraphers.

Mythbusting: what is calligraphy not?

1. "What is calligraphy?" — "Ornamental decorated letters."

Nope. Calligraphy is not just about decorated text, nor is it only about the use of letters as ornaments. It's more than that.

True, calligraphic letters and pages are very often dressed up with some form of decoration: gold, colour, pattern, pictures, flourishes etc. (More about that elsewhere.) But this ornamental layer only decorates the underlying FORM. There is a big difference between a beautiful form and beautiful ornament on top of a form. Calligraphy is about symbols themselves being beautifully formed and arranged.

Think of the structure and form of an alphabet-letter, or even a whole page of text, as being like the bones and muscles of a body. Naked, undecorated calligraphy should look good just as it is, in the same way that athletes, models and healthy people would look good without their clothes on.

2. "What is calligraphy?" — "Beautiful handwriting."

Not exactly and not entirely. Calligraphy means more than just beautiful handwriting.

True, the Greek derivation of 'calligraphy' translates simply as 'beautiful writing'. But the word has taken on a larger meaning.

Bear in mind that the first goals of handwriting are to be quickly and easily written and accurately read. Beauty, personality and artistic impact are not as important in handwriting as clarity and speed.

So, although calligraphy is a kind of handwriting, and some handwriting is calligraphic in appearance, they are not the same. It’s the difference between ‘writing as an art form’ and ‘artistic-looking handwriting’. Calligraphy aims to produce an 'art' reaction, in which a deeper meaning is communicated from artist to viewer, and the viewer feels invited to think a new thought in response. Handwriting, by contrast, aims to be read.

Well, no. Calligraphy is not exactly the same as ‘lettering.’ 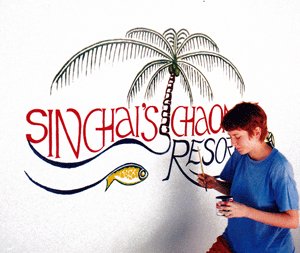 Lettering is a bigger subject than calligraphy: it is everything to do with the formation and use of alphabet letters to communicate meaning, and so it involves typography, sign-writing, graffiti, graphic design and many other disciplines.

Yes, calligraphy requires good letter-formation, and so calligraphy is a form or mode of lettering by hand. But 'lettering' and 'calligraphy' are still different disciplines.

Lettering can be excellent as lettering without having to be a piece of individual art (which is what calligraphy aims for). And, on the other hand, Chinese calligraphy (for example) can be the most beautiful art, but it doesn't involve any kind of alphabet letters :-)

There is a big overlap between calligraphy and lettering. But their purposes aren't the same.

No, no, no. Calligraphy is not mere reproduction of historical alphabets.

True, calligraphers are highly conscious of the history of writing, and their work is shaped by a long, inventive heritage. Imitating historical handwriting is a wide, well-lit highway to calligraphic success because it gives us so much known beauty to learn from.

But only copying the handwriting-style or the work of others in the past is not the creative purpose of calligraphy.

Learning how to write historical hands is an excellent method of training the hand and eye, but it's not the calligrapher's final destination.

No, again! Calligraphy is not a font or a typeface.

Fonts are the styles of lettering used in machines and printing-presses. Yes, machine letters are a vital aspect of lettering and yes, beautiful fonts and typefaces are often designed by calligraphers.

Calligraphers even use software to arrange pieces and create or adjust letter-forms.

But the individual ‘stamp’ of the calligrapher’s personality on the work is ultimately what makes calligraphy an art form. The individual 'fire' or 'soul' which is unique to one piece doesn't translate into letter-forms that have been standardised for machine use.

More on 'What is calligraphy?' ... from the experts

I hope you have seen how there is more to it than just that.

Here’s more on how to recognise calligraphy, from Michelle P. Brown, a world expert on manuscripts:

And one good general definition of calligraphy as a practical activity, from Vance Studley, a left-handed calligrapher:

... here is how calligraphers explain ‘what is calligraphy.’.

Comments are grouped according to the criteria above: INTEGRITY of letter-form, HARMONY of elements, an awareness of ANCESTRY, some RHYTHM and that 'something else' I have called SOUL.

What is calligraphy? The letter-forms have INTEGRITY

"... fundamentally the shape and form of a thing must spring directly from the tools and material used to make it." (D. Harris, Calligraphy: Modern Masters – Art, Inspiration, and Technique (NY: Crescent Books, 1991), p. 7)

"... calligraphy can be learnt by students understanding the structure of the letterforms and attempting to make letters themselves." (A. Trudgill,Traditional Penmanship (London: Studio Vista, 1988), p. 9)

What is calligraphy? The elements work in HARMONY

"... the making of beautiful letter forms ... arranging those letters into visually harmonious relationships" (A. Furber,Layout and Design for Calligraphers(London: Dryad, 1985), v)

"A calligrapher’s skill can never be judged on the basis of individual letters, just as musicianship cannot be heard in single notes. A full sense of an individual’s vision and mastery of the medium comes from the relationships brought into being between many elements." (E. Clayton in S. Knight, Historical Scripts From Classical Times to the Renaissance (Delaware: Oak Knoll Press, 1998), p. 7

"Calligraphic design is ... either predominantly or wholly concerned with the visual arrangement of words." (Diana Hardy Wilson, The Encyclopedia of Calligraphy Techniques (London: Quarto, 1992), p. 24, ‘Composition’)

What is calligraphy? It seems aware of its ANCESTRY

"Traditional letterforms are the result of using traditional tools. The marks are made by hand-held implements and not by machines." (A. Trudgill, Traditional Penmanship (London: Studio Vista, 1988), p. 11)

"By calligraphy or calligraphic I shall mean throughout the influence of the formal broad-nibbed pen." (T. Perkins, ‘Calligraphy as a Basis for Letter Design’, in H. Child, The Calligrapher’s Handbook(London: A&C Black, 1985), p. 155)

"It is not easy to acquire practical techniques from the written word alone ... There is no substitute for actually cutting a quill, stretching and mounting vellum, laying gold leaf, or sharpening a metal nib." (H. Child, ‘Preface’, in The Calligrapher’s Handbook (London: A&C Black, 1985), x.)

What is calligraphy? It moves with RHYTHM and SOUL

"I feel that calligraphy is not only a question of technique and skills but also a spiritual matter. It helps me to make up another reality." (C. Dieterich, in D. Harris,Calligraphy: Modern Masters – Art, Inspiration, and Technique (NY: Crescent Books, 1991), p. 114)

"Both in writing and in music, rhythm is the most outstanding element. It is rhythm which lends calligraphy the breath of the individual." (G. Pott, in D. Harris,Calligraphy: Modern Masters – Art, Inspiration, and Technique (NY: Crescent Books, 1991), p. 60)

"Calligraphy is the art of writing beautifully. It is the written letter, molded by one’s concept of ultimate grace and perfect balance, a personal artistic expression as unique as the lines on the fingertips with which one holds the pen. It places one’s soul at the tip of the pen for all to see." (M. Drogin, Medieval Calligraphy: Its History and Technique (NY: Dover Publications, 1980), p. 3

Calligraphy is writing as art: it is making meaningful marks beautifully so they show INTEGRITY, HARMONY, ANCESTRY, RHYTHM and SOUL.

Now that we've tackled all that, I hope you feel inspired to go out immediately and create more calligraphy!

Return from 'What is calligraphy?' to the Calligraphy Skills homepage