Samples of various calligraphy alphabets are shown below to help your calligraphy. These are all written by me as an interested amateur.

Note other pages on the site have much more on gothic, italic, and rustic capitals.

You'll also find links below to my free tutorial pages and useful books.

(Note: many more calligraphic and historical alphabets exist than just the ones listed below. But these will give you an idea of the major families of calligraphy alphabets.)

Have fun with the

Rustic Capitals are a robust, dynamic calligraphy alphabet, good for titles when you want formality and impact without rigidity.

Rustic Capitals are the oldest script I include tutorials for on this site. They are basically a nib- or brush-written alternative version of the grand, stone-chiselled, square capitals you can still see all over Roman monuments.

Living in ancient Rome, you would have seen announcements, information or even rude messages written in Rustic Capitals on the walls of the city, in just the same way as advertising posters or graffiti today.

I love this alphabet, and so have written a free Roman Rustic Capitals tutorial to encourage others to use it more, too.

Two calligraphy books stand out for this script:

Uncial's rounded form owes something to the Greek alphabet, and historically it's associated with the early Christian Church. It superficially resembles traditional Irish scripts (Irish/Insular Majuscule). In one form or another, it was used in handwritten books for nearly a millennium. For much of that time it was strictly a calligraphy alphabet (rather than a historical script) in that it was written out slowly and painstakingly to look as impressive as possible.

Uncial is easy to read, with serene overtones, and lends itself to short poems, quotations, and titles. But it takes up quite a lot of space. Recommended tutorial books:

I have a particular soft spot for Gothic calligraphy alphabets. The above is a version of Gothic textura quadrata (which means 'woven-looking', because it's carefully done, and 'four-cornered', because the letters have a rectangular, blocky shape). This was the script of choice for centuries of book production in medieval Europe.

I offer several good, free pages on Gothic, including a nice intro, a three-page tutorial on the minuscule (small) letters starting here, and another tutorial page for writing Gothic majuscules (capitals).

Anne Trudgill gives clear instructions on how to produce a handsome Gothic alphabet, and, for beginners, I also recommend George Thomson's How to Master Broad Pen Script (his examples are huge and easy to copy, with helpful instructions).

Roundhand is a modern, twentieth-century calligraphy alphabet based on the scripts of the Italian Renaissance, which themselves were invented because Italian scholars (in particular) had got heartily fed up of trying to read long texts written in tiny, cramped Gothic.

The great virtue of Roundhand is its simplicity. It may seem like a humble virtue but it is not therefore to be disregarded. Any Roundhand lends itself to circumstances in which you want to communicate sincerely and without pretension: poems by Robert Frost, instructions in case of zombie attack, children's alphabet posters, letters of advice to your younger self, diaries for publication, etc.

I recommend George Thomson's How to Master Broad Pen Script: it's as simple and unpretentious as Roundhand itself, and the examples are beautifully clear. Trudgill is also very good.

For a historical version of the script, see (again, always; it's a wonderful book) Michelle Brown and Patricia Lovett's The Historical Sourcebook for Scribes, pp. 111-120.

Italic is a beautifully legible calligraphy alphabet, elegant without being fussy, and has been taught for generations as the foundation of good cursive handwriting. It's not as simple as it looks to dash it off at speed! However, learning this script is well worth the effort. I offer a couple of pages to help – one on specific Italic letterforms, and one of more general Italic tips on issues like spacing, and I also recommend:

Copperplate is written with a finely pointed, very flexible steel nib which opens and closes with pressure to produce thick and thin lines. It's called Copperplate because it imitates the very fine, heavily slanted scripts of eighteenth- and nineteenth-century engravings on copper plates (which themselves were based on beautifully hand-drawn letters). There are other names: English Roundhand (do not confuse with other Roundhands written with a broad nib), Engrosser's Hand, etc.

Copperplate-type calligraphy alphabets have an old-fashioned flavour but not too distant in time: think Interview with the Vampire, Dickensian clerks scratching away, or, in the US, the copy of the Declaration of Independence held in the National Archives.

The example above is more rounded than a true Copperplate, with less thin-and-thick contrast than you'd ideally find. Any amount of practice on these graceful, flourished scripts is well repaid and they are suitable for a huge range of uses, from display pieces to certificates to wedding invitations. 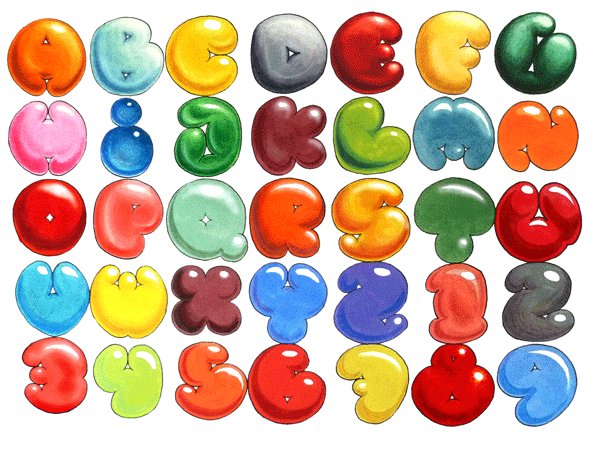 Just for fun :-) Arguably, bubble letters aren't a calligraphy alphabet. But calligraphy skills include the ability to draw letterforms such as Roman Monumental Capitals, and Versals, which are often coloured in or made to look three-dimensional, so I see no reason why bubble letters shouldn't also be on the menu. They're great for humorous or cheerful titles which appeal to the eye and are not intended to be taken too seriously.

As you can see, there's a variety of shading and lighting effects going on above – I was experimenting. Most of the effects use pen, brushes and artist's gouache but here and there I've done a bit of photoshopping, too.

This alphabet's my own design. I wanted to make bubble letters actually based on a circle, rather than drawn as outlines round a standard Roman capital letter. The process for each letter is described in three pages, starting here, or you might like this overview of bubble-letter forms.

That's it for the moment. Have fun with your own alphabets!

Return from 'calligraphy alphabets' to homepage

Calligraphy book reviews (includes all the books mentioned above)